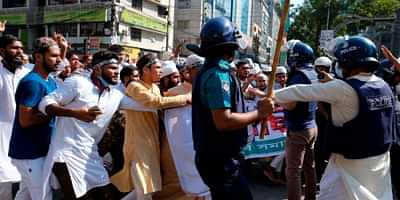 A Hindu temple has been vandalised in Bangladesh in a fresh case of communal unrest amidst days of violence unleashed by unidentified Muslim bigots who attacked the minority community’s places of worship during the Durga Puja celebrations over alleged blasphemy, prompting a minority group to announce a countrywide hunger strike, media reports said on Sunday.

Hindu-owned temples and shops in Feni, about 157 kms from the country’s capital, have been vandalised and robbed during fresh clashes on Saturday which broke out after an attack on demonstrators who were protesting against the attacks on Durga Puja venues in several places in Bangladesh, the Dhaka Tribune newspaper reported.

It said that the clashes left at least 40 people, including the Officer In-charge Nizamuddin of Feni Model Police Station, injured in the clashes.

On Saturday night, authorities deployed additional police forces and the paramilitary force — Border Guard Bangladesh (BGB), after several temples and businesses owned by Hindus were vandalised and robbed during clashes that lasted from 4:30 PM (local time) to midnight, the report said.