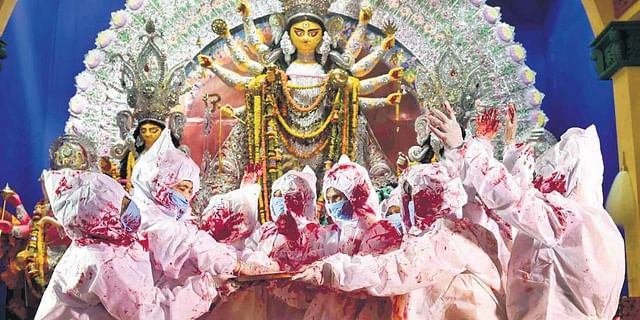 Following reports of vandalism in Durga Puja pandals in Bangladesh, Prime Minister Sheikh Hasina issued a warning to the miscreants and said they would taken to task. “Incidents in Cumilla are being investigated. Nobody will be spared. It doesn’t matter which religion they belong to. They will be hunted down and punished,” she said during an event at Dhakeshwari National Temple in Dhaka.

Joining the event virtually from her official residence, Hasina said this is the era of technology and culprits will be tracked. “We also urged India to remain vigilant against an escalation of any communal violence. We expect that nothing happens there which could influence the situation in Bangladesh affecting our Hindu community,” she said.

The Bangladesh Prime Minister’s remarks come after four people died in the violence that broke out at Hindu temples in various parts of Bangladesh, including Chittagong. Attacks were carried out on Durga Puja sites and temples in Cumilla on October 13 after rumours surfaced that a copy of the Quran was allegedly placed near the feet of a Durga idol. Attacks were also reported in Noakhali, Chandpur, Cox’s Bazaar, Chittagong, Chapainawabganj, Pabna, Moulvibazara and Kurigram.

The Bangladesh government deployed paramilitary forces in 22 districts to curb the violence. “Investigations are underway and we are identifying the culprits using camera footage,” deputy inspector general Anwar Hossain said. There are more than 3,000 Durga Pujas in Bangladesh, where Hindus make up for nearly 10 per cent of the population.