‘Beijing’s statements have no basis’: India hits out at China; rejects fresh allegations over Ladakh row 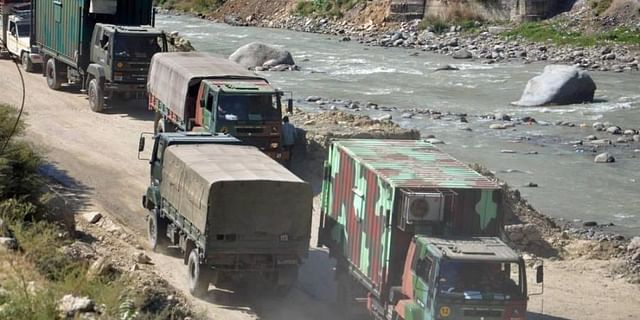 India on Thursday hit out at China for attempting to blame it for the eastern Ladakh standoff, asserting that the “provocative” behaviour and “unilateral” attempts by the Chinese military to alter the status quo along the Line of Actual Control (LAC) in the region seriously disturbed peace and tranquillity in the region.

External Affairs Ministry Spokesperson Arindam Bagchi said China continues to deploy a large number of troops and armaments in the border areas and it was in response to Chinese actions that Indian armed forces had to make appropriate counter deployments.

He said China’s allegations have “no basis in facts” and that it is India’s expectation that the Chinese side will work towards an early resolution of the remaining issues while fully abiding by bilateral agreements and protocols.

India’s reaction came in response to China’s fresh allegation that the “root cause” of the tensions between the two countries was New Delhi following a “forward policy” and “illegally” encroaching Chinese territory.

Replying to a media query on China’s allegations, Bagchi said India has already made its position clear on the matter a few days back and rejected such statements that have “no basis in facts”.

“It was the amassing of large number of troops by the Chinese side, their provocative behaviour and unilateral attempts to alter status quo in contravention of all our bilateral agreements that resulted in serious disturbance of peace and tranquillity along the LAC in eastern Ladakh,” he said.

“China continues to deploy large number of troops and armaments in the border areas. It was in response to Chinese actions, that our armed forces had to make appropriate counter deployments in these areas to ensure that India’s security interests are fully protected,” he said.

He also referred to External Affairs Minister S Jaishankar’s message to his Chinese counterpart in a meeting in Dushanbe earlier this month.

“As emphasised by the external affairs minister in his meeting with Chinese foreign minister earlier this month, it is our expectation that the Chinese side will work towards early resolution of the remaining issues along the LAC in eastern Ladakh while fully abiding by bilateral agreements and protocols,” Bagchi said.

“India has long been following the forward policy and illegally encroached upon China’s territory across the border,” Chinese Foreign Ministry spokesperson Hua Chunying told a media briefing while replying to a question on reports of India deploying artillery guns in eastern Ladakh.

“This is the root cause of the tensions,” Hua said.

Since the border standoff last year, India has been holding China’s provocative actions responsible for triggering it.

The border standoff between the Indian and Chinese militaries erupted on May 5 last year in eastern Ladakh following a violent clash in the Pangong lake area.

Both sides gradually enhanced their deployment by rushing in tens of thousands of soldiers as well as heavy weaponry.

As a result of a series of military and diplomatic talks, the two sides completed the disengagement process in the Gogra area last month.

In February, the two sides completed the withdrawal of troops and weapons from the north and south banks of the Pangong lake in line with an agreement on disengagement.

Each side currently has around 50,000 to 60,000 troops along the Line of Actual Control (LAC) in the sensitive sector.