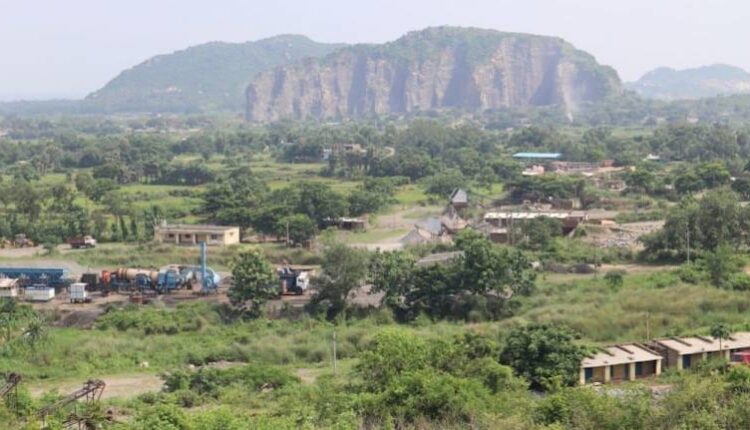 In mid-2020, photographers, travel bloggers and youth thronged a hillock at Nijigarh Tapang (Khurda), just outside Odisha’s capital city, Bhubaneswar. They termed it as a hidden tourist site that had now gained popularity for its picturesque views and bluish-green waters. However, most of the visitors were unaware that the beauty was just a remnant of a degraded hillock that had been stripped of its green cover and broken down to almost half its size, with huge machines, for stone mining activities, over the past few years.

Images from Google Earth show that, in 2006, the hillock, which is locally termed as Hathia Mundia (elephant hill) in Odia, was standing tall with green cover and had no water around it. However, slowly, stone quarrying for the supply of stones for construction activities degraded it to almost half its size.

Shankar Prasad Pani, a lawyer who fought the case about illegal stone and laterite mining of Tapang before the National Green Tribunal (NGT), explained that now, the remaining hillock was surrounded with deep water which had oozed out allegedly due to the deep extraction of stones beneath the hillock.

“When there was a mandate to drill only six metres below the earth, several miners went on to illegally drill beyond six metres and carved out artificially created deep lakes. This is just a living example of the illegal work of those mining the stones of Khurda hills,” Pani told Mongabay-India.

However, Hathia Mundia is not the only hillock in Odisha that was degraded due to mining activities. There are several others, which in the last decade, were stripped of their greenery and the local landscape was changed.

Residents of Nijigarh Tapang, which is about 25 kilometres away from Bhubaneswar, told Mongabay-India that after local protests, litigation and action by the government, mining activities in the major hillocks in that area have stopped but instead, they have started in other regions of Khurda later.

“The whole human settlement living in Tapang faced the wrath of the miners. Our standing crops were damaged, blasting in these sites broke buildings nearby and the whole area which connects the National Highway-16 with nearby villages was engulfed in dust,” said Kahnu Charan Chhualsingh, a resident of Tapang.

Others claimed that while some people from the local community protested, many others remained quiet to the plundering of natural resources. “Most of the norms related to stone mining were ignored and the local communities faced the impact. Later, cases were filed before the NGT too into this regard,” said Madhusudhan Chhotray, a resident of Nijigarh Tapang.

During a visit, Mongabay-India found that while stone mining, at least in Tapang, came to a standstill by major excavations in the past few years, the ancillary industries dependent on them still are adding to the woes of the local community. Several stone crushing units operating without any green belt, boundaries and other restrictions are constantly releasing dust into the air.

Prafulla Samantara, who works for the mining-affected communities, said, “Slowly, Khurda lost several of its mountains to stone quarry and saw increased penetration of mining-related ancillary units like stone crushing units and others which increased the quantum of dust and air pollutants in the area which was earlier filled with greenery.”

“This was made possible due to the lack of attention and monitoring of the government,” Samantara, who is also the winner of the 2017 Goldman Environment Prize, told Mongabay-India while talking about the transition that the region witnessed over the years.