Congress back on the throne after 6 years, beats BJP in Rajasthan rural polls 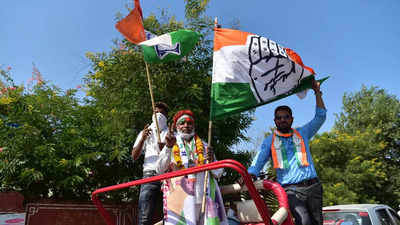 In good news for the ruling Congress party in Rajasthan, it managed to win most zila parishad and panchayat samiti seats in six districts, the counting for which was held on Saturday.

The results are some respite for the Congress, which had finished behind the BJP in both the zila parishad and panchayat samiti polls held in 21 districts in November-December last year. On the other hand, the results may make things worse for the Satish Poonia-led Rajasthan BJP, which is already battling factionalism.

Out of six zila parishads, the Congress is set to form Boards in four, after crossing the halfway mark in Dausa, Jaipur, Jodhpur and Sawai Madhopur. In Bharatpur, the BJP fell two short of the majority mark of 19 and will have to rely on Independents to form the Board. In Sirohi though, the Congress received a drubbing, with the BJP winning 17 of the 21 zila parishad member seats.

The Congress won the most panchayat samiti seats too, winning 670 of the total 1,564, with the BJP trailing at 551. Independents had the third highest seats, at 290, with the Hanuman Beniwal-led Rashtriya Loktantrik Party also putting up a decent show with 40 seats — mainly in Jodhpur — followed by 11 seats to the BSP. Beniwal had split with the NDA late last year. The results of two seats were yet to be declared till Saturday night.

In Chief Minister Ashok Gehlot’s home turf of Jodhpur, the Congress won most of the 21 panchayat samitis. In Jaipur too, the Congress was ahead, with the BJP close behind. They were neck-and-neck in a few others, such as the Amer panchayat samiti, where both the parties won 11 seats, one short of the majority mark of 12. A lone Independent now holds the key. BJP chief Poonia is the MLA from Amer. In Jalsu, the other panchayat samiti in his Assembly constituency, the BJP won 12 seats against 9 for the Congress.