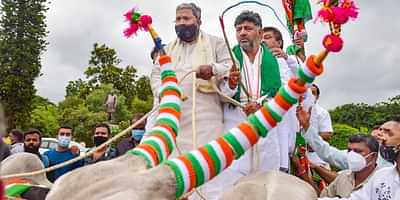 To mark their protest against the rising fuel prices on day one of Karnataka’s legislature sessions, a few Congress leaders led by KPCC president DK Shivakumar and leader of opposition Siddaramaiah took a bullock cart to reach the Vidhana Soudha.

Speaking to reporters, Siddaramiah said, “BJP is lying, they are just blaming crude oil prices in the international market. We are going to highlight this in the house during the session.” Congress demanded that LPG gas prices be reduced by Rs 150 and petrol and diesel by Rs 25 and Rs 15 per litre respectively.

Reacting to this, Chief Minister Basavaraj Bommai said when UPA was in power in the centre, Congress did not raise this issue at all. The petrol price had crossed Rs 100 per litre during UPA, but they were mum at that time. “We know they are going to raise this issue and we have an answer for it,” CM Bommai said.

Along with Shivakumar, Siddaramiah, senior congress leaders Ramalinga Reddy MB Patil, Eshwar Khandre and others also took the ride on bullock carts. While these leaders were in the bullock cart, Congress MLAs Venkataramappa and BK Sangamesh fell down. However, no one was injured in the incident.