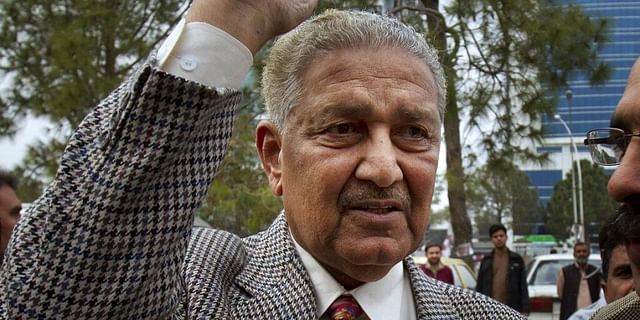 AQ Khan, a controversial scientist known as the father of Pakistan’s clandestine nuclear programme, passed away here on Sunday after a brief illness.

The nuclear physicist was disgraced in 2004 when he was forced to accept responsibility for nuclear technology proliferation and was forced to live a life of official house arrest.

Khan, who was born in 1936 in Bhopal and migrated to Pakistan along with his family after the Partition in 1947, breathed his last at about 7.00 AM (local time) at Khan Research Laboratories (KRL) Hospital.

Geo News reported that Khan was brought to the hospital early in the morning after he faced difficulty in breathing.

According to doctors, Khan’s health deteriorated after bleeding in his lungs.

He could not survive after his lungs collapsed.

Interior Minister Sheikh Rasheed said that all efforts were made to save his life.

Had known him personally since 1982.

He helped us develop nation-saving nuclear deterrence, and a grateful nation will never forget his services in this regard….”

Prime Minister Imran Khan said that he was “deeply saddened by the passing of Dr A Q Khan”.

“He was loved by our nation bec of his critical contribution in making us a nuclear weapon state. This has provided us security against an aggressive much larger nuclear neighbour. For the people of Pakistan he was a national icon (sic),” he said in a tweet.

Defence Minister Pervez Khattak said he was “deeply grieved” over his death and called it a “great loss”.

“Pakistan will forever honour his services to the nation! The nation is heavily indebted to him for his contributions in enhancing our defence capabilities,” he said.

Funeral prayers will be offered at 3 PM (local time) at the Faisal Mosque in Islamabad, according to officials.

Khan, considered as the father of Pakistan’s nuclear bomb, is revered at home as a hero.

He was also called a man who built the Muslim world’s first atomic bomb.

His services for defence of the country will be remembered for a long time.

Khan lived as semi-secluded in Islamabad’s posh neighbourhood of E-7 sector under the watch of security agencies since 2004.

Later, he retracted his statement, which he said was made under duress exercised by then military dictator Gen. Pervez Musharraf.

He said Pakistan would never have achieved the feat of becoming first Muslim nuclear country without his “services”.

Referring to the treatment meted out to him during under Musharraf, Khan said nuclear scientists in the country have not been given the respect that they deserve.

In 2009, the Islamabad High Court declared Khan to be a free citizen of Pakistan, allowing him free movement inside the country.

Khan had also said that Pakistan has the ability to “target” Delhi from Kahuta near Rawalpindi in five minutes.

In a 2018 book “Pakistan’s Nuclear Bomb: A Story of Defiance, Deterrence And Deviance”, Pakistani-American scholar and academic Hassan Abbas has highlighted Khan’s involvement in nuclear proliferation in Iran, Libya and North Korea.

He wrote that the origins and evolution of the Khan network were tied to the domestic and international political motivations underlying Pakistan’s nuclear weapons project.

The writer also examined the role of China and Saudi Arabia in supporting its nuclear infrastructure.

Khan is reported to have intimate links with China’s nuclear establishment.