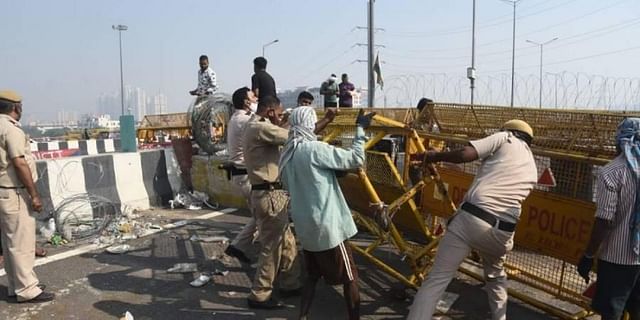 The Delhi Police on Friday started removing the barricades and concertina wires it had put in place at the anti-farm laws protest site at Ghazipur on Delhi-Uttar Pradesh border.

Multiple layers of iron and cement barricades, and at least five layers of concertina wires were put up by the police in the wake of the January 26 violence during the farmers’ protest against the three contentious farm laws.

Police officials and labourers were also seen removing iron nails that were studded on the NH9 at Ghazipur, where hundreds of protests, chiefly belonging to the Bhartiya Kisan Union (BKU), have been occupying a road stretch since November 2020.

The BKU is a participant of the anti-farm laws movement spearheaded by farmers collective Samyukta Kisan Morcha (SKM).

The removal of barricades comes after the October 21 Supreme Court direction that called for unblocking of roads which have remained out of bounds for commuters due to the protests at Delhi’s border points of Singhu, Tikri and Ghazipur.

While the protesting farmers have been claiming that the three laws enacted last year are against their interest, the Centre has been saying these legislations are pro-farmer.

US, India urge Taliban to ensure Afghanistan is not used as terrorists’ safe haven