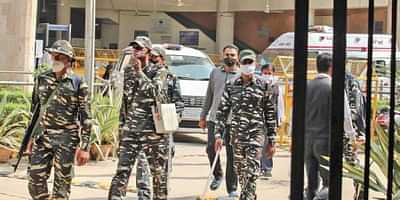 CJI NV Ramana has expressed concern over the shooting incident at Rohini Court Complex on Friday. He spoke to the chief justice of Delhi High Court in this regard and advised him to talk to both police and the Bar to ensure the functioning of court is not affected.

Meanwhile, the incident at Rohini Court, one of the busiest trial courts in Delhi, has raised several serious questions on the safety and security of judges and litigants and stresses the need of having a dedicated police force for the judiciary.

In the last five years, four different incidents of firing have taken place inside the Rohini Court complex. According to sources, the judge, who was hearing the case when the shooting took place, has been hospitalised after he complained of low blood pressure.

India, US condemn cross-border terrorism; call for perpetrators of 26/11 attacks to be brought to justice