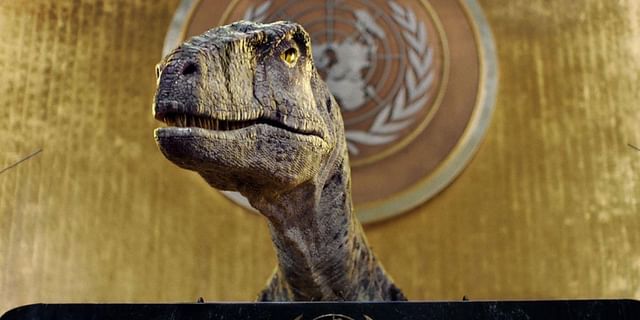 An extremely unusual and rare visitor made an appearance in the UN General Assembly, exhorting world leaders and diplomats from the hall’s iconic podium not to choose extinction and to save the human species “before it’s too late.”

As diplomats are seated in the 193-member General Assembly, a dinosaur enters the cavernous hall, eliciting fear, gasps and shock from the delegates.

Walking to the iconic UNGA podium, the dinosaur then addresses the delegates from the lectern, “Listen up people. I know a thing or two about extinction. And let me tell you, and you’d kind of think this would be obvious, Going extinct is a bad thing.

And driving yourselves extinct? In 70 million years, that’s the most ridiculous thing I’ve ever heard!” “At least we had an asteroid. What’s your excuse? You’re headed for a climate disaster. And yet every year governments spend hundreds of billions of public funds on fossil fuel subsidies,” the dinosaur says in a video released on Wednesday.