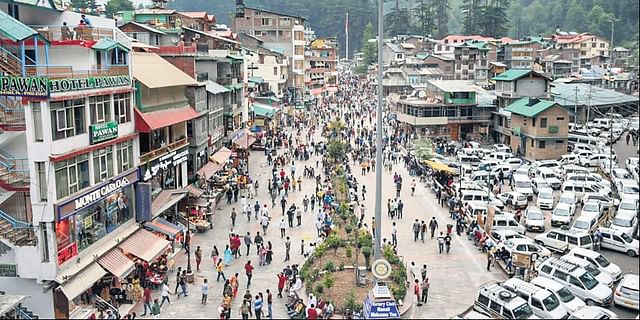 Stressing on responsible travel, researchers have warned that a rise in population density driven by tourist arrivals or mass congregations due to social, religious or political events clead to a surge in Covid infections worsening an anticipated third wave scenario in selected states.

Illustrating a scenario where population density in India has a stronger effect on transmission than in the USA, researchers said a holiday period can amplify a possible third wave peak by up to 103 per cent and cumulative incidence in that wave by 43 per cent.

It can also hasten the timing of the epidemic peak by four weeks, compared to a scenario of easing restrictions in the absence of holiday travel, they said.

The opinion piece, based on mathematical models ‘Responsible travel to and within India during the COVID-19 pandemic’, by Balram Bhargava, Samiran Panda and Sandip Mandal from ICMR and Nimalan Arinaminpathy from Imperial College London, has been published in the Journal of Travel Medicine.

In their study, the researchers illustrated some possible scenarios in a hypothetical state in India constructed to resemble Himachal Pradesh in the dynamics of its first and second waves, including the much lower seroprevalence of SARS-CoV-2 compared to the rest of the country.

“A sudden increase in population density due to incoming tourists or mass congregations due to social, political or religious reasons can worsen the third wave scenario,” the researchers said in the opinion piece.

Data from Himachal Pradesh suggests that in a typical holiday season, tourism can increase the population by 40 per cent.

A recent study in the USA suggests that an increase in one unit of log population density increased R0 (the basic reproduction number/rate) by 0.16.

“Taking this into consideration, the third-wave peak can increase by up to 47 per cent during the holiday season and can occur two weeks earlier compared to a scenario of easing restrictions in the absence of holiday travel,” researchers said.

Smaller states with rarefied populations witnessed not only less intense spread than was apparent at the national level but also delayed attainment of the second peak, they observed.

Giving examples of popular tourist destinations such as Manali and Darjeeling, the researchers said that observations indicate increasing opportunities for transmission in areas where population-level immunity has not yet accumulated to the same levels as elsewhere in the country.

“Against a backdrop of increasing anticipation of a third wave of COVID-19 in India, it is important to recognize the potential risks associated with such an escalation in travel,” they said.

Proposing ‘responsible travel’, researchers said mask use and observing social distancing norms by tourists can have important effects in mitigating the risk of disease transmission.

Beyond their protective effect, mandating these precautions will also serve as an important and continuing reminder of the risk of COVID-19, they said, adding conditions on travel like allowing tourists only with recent Covid-negative test report can also play a key role.

Vaccine status can also play an important role in eligibility to travel, with some caveats, researchers said.

“Vaccine passports have limitations, arising from uncertainties about how the nature and strength of vaccine-induced immunity would change over time. Also, despite being the world’s largest producer of COVID-19 vaccines, India faces the challenge of having the world’s second-largest population to vaccinate.”

“Nonetheless, as vaccination coverage scales, vaccine status can play an increasingly important role in eligibility to travel,” they said.

Immunization planning may also benefit from prioritizing the local population in holiday destinations.

Maintaining surveillance in at-risk settings, ensuring that virological testing is maintained even during apparent low infection activity will be important, the opinion piece stated.

Information on genomic surveillance in other nations and vigil at international airports will be valuable for early identification of unrecognized variants, it said.

Observing that no national guideline exists on restrictions about domestic travel, the researchers said it may be helpful for holiday-destination states to get guidance on how they can best mitigate travel-related risks.

“With the possibility of a severe third wave in India still looming, it remains critical to recognize and mitigate the risks involved.”

“A shared sense of responsibility, amongst visitors, residents and local authorities, will go a long way towards protecting the welfare of the country as a whole,” the researchers added.