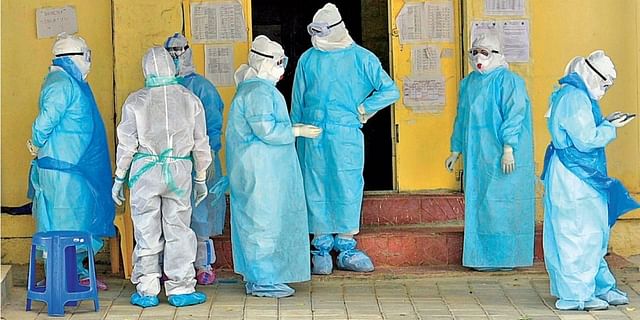 In a boost to the Centre’s project that detects new and emerging Covid variants, at least five private laboratories have joined the network of 28 government laboratories involved in the task.
Sujeet Kumar Singh, director with the National Centre for Disease Control which leads the consortium, told this newspaper that the private laboratories that fulfil the specifications listed by the Department of Biotechnology were approved to join the network.

Beginning with 10 national research laboratories that came together in view of the B1617 variant of Covid, the INSACOG project went on to add 18 more regional laboratories over the past few months. While nearly 60,000 samples were subjected to whole genome sequencing till September, nearly 7,000 samples per month, the government plans to further enhance the capacity to 70,000 samples.

“As of now, the turnaround time for samples undergoing WSG every month is nearly 10-15 days,” said a senior official. “We hope to bring it down to four-five days and adding private laboratories will be a big help in that direction.”

Officials said that the works of these laboratories are crucial for the identification of variants of concern and interest so as to advise the policy makers for effective management of the Covid pandemic.
The project, for instance, had first identified the Delta variant in February in Maharashtra. The variant later took the country by storm, triggering a massive second wave in India. Many experts feel that not enough attention was paid to the issue which led to the huge surge in Covid cases, shortage of hospital care and, eventually, deaths.

“After that certain specific criteria were laid down and the laboratories were asked to submit their expression of interest in a standardised format with details such as the type of sequencing platform that is operational, number of viral genome sequences that is being proposed to carry out per week or per month, number of trained laboratory personnel available,” an NCDC official said, adding that five laboratories so far have been approved to join the consortium.

Another encounter breaks out in J&K’s Shopian, search operations underway