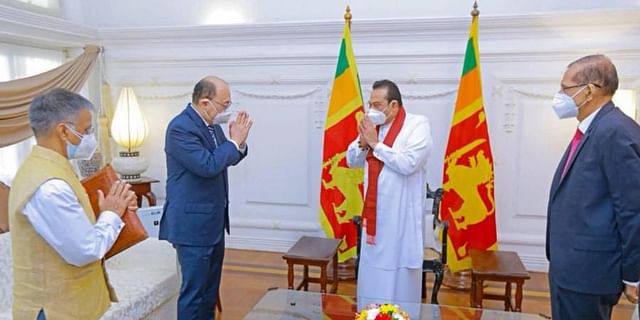 Shringla arrived in Sri Lanka on Saturday on a four-day visit and is also expected to meet President Gotabaya Rajapaksa and review the bilateral ties between India and the island nation.

“Foreign Secretary @harshvshringla called on HE Mahinda Rajapaksa @PresRajapaksa today and had a productive discussion on further consolidating the multifaceted India-Sri Lanka partnership,” the Indian High Commission here said in a tweet along with a photo of the meeting.

According to a statement issued by the Ministry of External Affairs, Shringla said,”a short while back, I had a very productive meeting with His Excellency Prime Minister Mahinda Rajapaksa, an ardent friend of India and a steady source of support for the deepening of the India-Sri Lanka engagement.”

Shringla said that he is looking forward to his meeting with President Gotabaya Rajapaksa.

“I look forward to calling-on His Excellency President Gotabaya Rajapaksa whose steadfast commitment to the India-Sri Lanka bilateral relationship is well known,” he said.

On Sunday, Shringla inspected Jaffna’s Palaly airport in Sri Lanka’s Tamil-dominated Northern province where he was briefed by officials on the development work undertaken with India’s assistance.

He also visited the iconic Jaffna Cultural Centre, which is built with Indian grant assistance.

Shringla would also meet a delegation of the main Tamil party, Tamil National Alliance for discussions.

India has been consistently calling upon Sri Lanka to fulfil its commitments to protect the interests of the Tamil community and preserve the island nation’s character as a multi-ethnic and multi-religious society.

The Tamil community in Sri Lanka has been demanding the implementation of the 13th Amendment to the Constitution that provides for devolution of power to it.

The 13th Amendment was brought in after the Indo-Sri Lankan agreement of 1987.

New Zealand admits it can no longer get rid of coronavirus