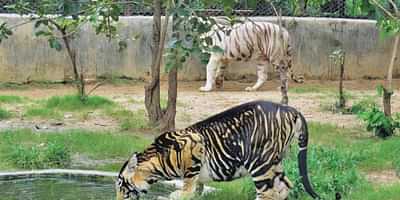 The rare melanistic tigers of Similipal Tiger Reserve (STR) have been decoded. A group of researchers has discovered the genetic mutation that caused pseudomelanism in a limited number of tigers found only in the fourth largest tiger habitat in the country.

The researchers, including scientists from the National Centre for Biological Sciences (NCBS), Bengaluru, headed by senior molecular ecologist Uma Ramakrishnan have found that a single mutation in the gene Transmembrane Aminopeptidase Q (Taqpep) caused the tigers develop black stripes and a distinct pattern.

The rare tigers were first officially discovered in STR in 2007. Since then it was a mystery and it led 18 researchers to conduct a broad study to decode the pseudomelanism in tigers. They had collected saliva and hair samples from the melanistic tigers which are born in captivity at Nandankanan Zoological park and faecal samples of tigers from STR.

“Of the 12 samples collected from STR, around 60 per cent (pc) were found to be of melanistic tigers which are most endangered as they exist in small populations; many of which are isolated too. Evolution in such populations is largely governed by genetic drift. Approximately 37 pc of tigers (Panthera tigris) in the STR are pseudomelanistic, characterised by wide, merged stripes,” said Ramakrishnan.