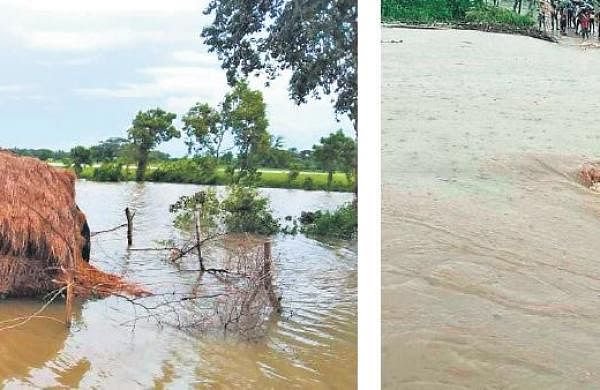 Heavy showers since the last three days have led to flood fears in Bhadrak, Balasore and Mayurbhanj with water levels rising in major river systems of the three districts.

Sources in the emergency office of Bhadrak said the district received 377 mm rain in the last 24 hours. Dhamnagar block recorded the highest 65 mm rainfall followed by Bhadrak and Basudevpur with 59 mm respectively. Salandi river was flowing at 17.28 metre against the danger mark 17.83 at Akhuapada. At Anandapur, water level of the river stood at 34.26 metre against the danger mark 38.05.

On Monday, the daily rituals at Akhandalamani temple in Bhadrak’s Aradi were disrupted after rainwater entered the Shaivite shrine. The water was drained out by using a pump set. Several villages in Chandabali block were inundated due to the heavy rains.

Superintending engineer of Balasore Irrigation Division Pravas Pradhan said water level of Jalaka river at Mathani in Basta block stood at 5.57 metre against the danger mark of 5.50. However, there was no flood-like situation in low-lying areas of the district yet.