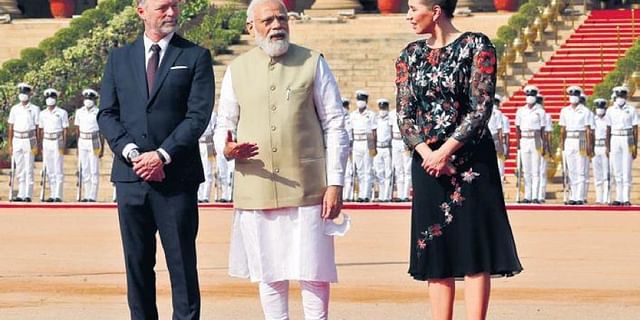 Prime Minister Narendra Modi on Saturday, October 9, 2021, held talks with his Danish counterpart Mette Frederiksen where the two leaders agreed to expand Indo-Danish cooperation to the fields of agriculture, water management, climate change and also reviewed the progress of the Green Strategic Partnership.

“A year ago today, we took the historic decision to establish a Green Strategic Partnership in our virtual summit. This is a sign of far-reaching thinking and respect for the environment,” the prime minister said.
The two leaders also witnessed the signing of four agreements and other MoUs.

The agreements that were signed include an understanding between National Geophysical Research Institute and Aarhus University and Geological Survey of Denmark and Greenland on mapping of groundwater resources and aquifers; and an MoU between Indian Institute of Science and Danfoss Industries Private Limited to establish a Centre of Excellence towards natural refrigerants for tropical climates with potential applications and a joint letter of intent between the Ministry of Skill Development & Entrepreneurship and the government of Denmark.

Three commercial agreements were also announced. This included an MoU between Reliance Industries Limited and Stiesdal Fuel Technologies on the development of the Hydrogen Electrolyzer.