‘India has put the ball in the court of developed world’: Experts on achieving net zero carbon emission by 2070 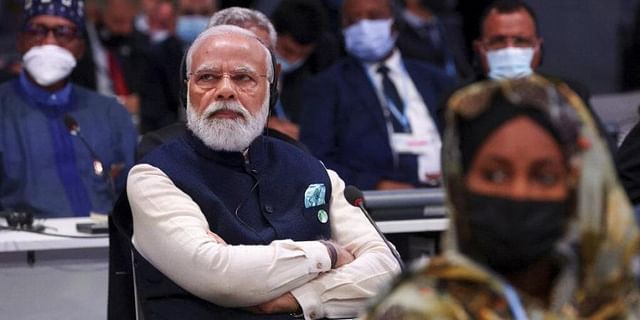 Environment experts Monday hailed as “real climate action” India’s pledge to achieve emission by 2070, saying that by making this big promises at COP 26 at Glasgow, India has put the ball in the court of developed nations to fulfil the promise of climate finance.

“I want to congratulate PM Modi and India for making a bold statement for low-carbon development. India has clearly put the ball in the court of the developed world. This is real climate action.”

“Now, India demands USD 1 trillion of climate finance as soon as possible and will monitor not just climate action, but deliver climate finance. Most importantly, India has called, once again, for a change in lifestyles. If we cannot fix how we live, we cannot fix the planet on which we live,” said Arunabha Ghosh, CEO and Founder of Council on Energy, Environment, and Water (CEEW).

Aarti Khosla, Director, Climate Trends, said, “By announcing a commitment for achieving net zero targets by 2070, India has responded positively to the global call and it was the best climate action in Glasgow today.”

“The commitment of 500GW of renewable energy by 2030, which is more than twice the installed capacity of coal currently, should set the stage for a quick transformation of the energy sector, the kind of which hasn’t been witnessed so far.

“Ensuring that the new energy regime doesn’t bring the pitfalls of the current regime will be fundamental. Solar and wind are poised to emerge as the future in the net zero world,” she said.

Prime Minister Modi, in his address at the ongoing COP 26 announced a bold pledge on Monday that India will achieve net zero carbon emissions by 2070 and asserted that it is the only country that is delivering in “letter and spirit” the commitments on tackling climate change under the Paris Agreement.

“PM Modi cut through the rhetoric and delivered a big promise of climate action from India. Reducing 1 billion tonnes of emissions by 2030 and expanding non-fossils capacity to 500 GW are enormous and transformative steps.”

“Fifty per cent of electricity generation from renewable energy sources speaks of India’s leadership and commitment to climate action. The Prime Minister has made bold announcements and led India from the front at the onset of the Glasgow meeting,” he said.

“India’s announcement of an ambitious 2030 target and a Net zero target is a big step for climate collaboration. I congratulate the PM for announcing this bold step which will go a long way in greening the Indian economy and solving the climate crisis,” he said.

Sharing a similar view, Vaibhav Chaturvedi, Fellow, CEEW, said that by announcing the net-zero year, the prime minister has also accorded a red carpet to foreign and domestic investors who want to invest in research and development, manufacturing, and deployment of green technologies in India.

“India’s efforts though will have to be supported by the availability of climate finance from developed countries. Without foreign capital, on concessional terms, this transition will prove to be difficult.”

“According to CEEW’s ‘Implications of a Net-zero Target for India’s Sectoral Energy Transitions and Climate Policy’ study, India’s total installed solar power capacity would need to increase to over 5,600 gigawatts to achieve net-zero by 2070,” he said.

Elaborating further, Chaturvedi said that the usage of coal, especially for power generation, would need to drop by 99 per cent by 2060, for India to achieve net-zero by 2070.

“Also, consumption of crude oil, across sectors, would need to peak by 2050 and fall substantially by 90 per cent between 2050 and 2070. Green hydrogen could contribute 19 per cent of the total energy needs of the industrial sector,” he said.

In 2015, India had committed to achieving 40 per cent of all installed electricity generation capacity to be from non-fossil energy sources by 2030.

As per the new NDC, 50 per cent of electricity generation will come from renewable energy sources by 2030 and the target of achieving 450 giga watt non-fossil energy capacity has been increased to 500 giga watt by 2030.

For the first time, India announced the target of achieving net zero emission by 2070 and that it will reduce carbon emissions by one billion tonnes by 2030.