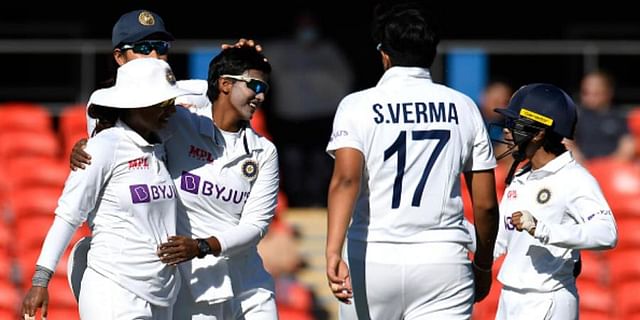 Meghna Singh, Pooja Vastrakar and Deepti Sharma bowled probing line and length as Australia declared their innings, giving India a lead of 136 runs in the opening session of Day Four of the ongoing pink-ball Test here at the Carrara Oval in Queensland on Sunday.

Right ahead of the dinner break, Australia skipper Meg Lanning declared the innings at 241/9 — still trailing by 136 runs. For the hosts, Ellyse Perry (67*) remained unbeaten.

Resuming Day 4 at 143/4, overnight batters Ashleigh Gardner and Ellyse Perry grinded it out in the middle and they did not let India bowlers walk away with early breakthroughs. Perry registered her half-century as a result, she became the first Australian woman to register four consecutive fifty-plus scores in Test cricket.

The 91-run stand for the fifth wicket finally came to an end in the 79th over. Deepti Sharma sent Gardner (51) back to the pavilion. Annabel Sutherland (3) failed to leave a mark with the bat as her innings was ended by Meghna Singh and Australia was reduced to 216/6 in the 84th over.

Meghna continued with her probing line and length and this resulted in the dismissal of Sophie Molineux (2) and Australia found itself in a spot of bother at 220/7. Pooja Vastrakar then got into the act and she got the better of Georgia Wareham (2) with Australia still five runs away from avoiding the follow-on.

In the end, Australia managed to avoid the follow-on. Deepti Sharma then got the better of Darcie Brown (8) in the 96th over and Australia was reduced to 240/9. Soon after, Australia skipper Lanning decided to declare the innings, still being 136 runs behind.

On the third day of the ongoing Test, India declared their innings at 377/8 after Smriti Mandhana top-scored with a knock of 127 runs.