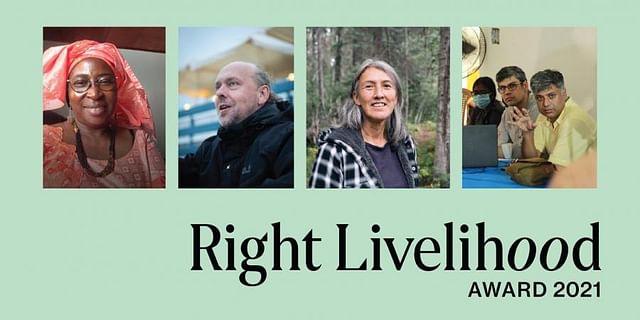 An Indian organisation is among four activists and groups which are awarded this year’s Right Livelihood Award, known as the ‘Alternative Nobel’, on Wednesday for empowering communities in areas ranging from child protection to environmental defence.

The Swedish Right Livelihood Foundation, which awards the prize, said that “in the face of the worsening climate crisis, powerful governmental and corporate interests, and even a terrorist threat, the 2021 Laureates prove that solidarity is key to a better future for all.”

The 2021 Right Livelihood Laureates are leaders in advancing the rights of women and girls, environmental protection and reclaiming Indigenous rights through mobilising communities and empowering grassroots initiatives.

“Hailing from Cameroon, Russia, Canada and India, this year’s change-makers show that lasting change is built on communities banding together,” it said.

Legal Initiative for Forest and Environment (LIFE), an organisation working to protect the environment in India through the creative use of law and legal processes, was among the winners.

LIFE works with communities through a grassroots approach.

It assists and empowers often vulnerable populations to stand up against powerful interests and have a voice in the decision-making process, while also strengthening institutions and reforming laws.

Noticing a lack of judicial access on environmental issues, LIFE was founded by lawyers Ritwick Dutta and Rahul Choudhary in 2005.

“The Award will help us increase the impact of our work, empowering more people to protect nature and livelihoods,” Dutta, co-founder of LIFE, said.

Created in 1980, the annual Right Livelihood Award honours efforts that the prize founder, Swedish-German philanthropist Jakob von Uexkull, felt were being ignored by the Nobel prizes.

The winners will each receive prize money of 1 million kronor (USD 115, 520) and will be honoured during a virtual award ceremony on December 1.

The foundation said that a record number of 206 nominees from 89 countries were considered in 2021.