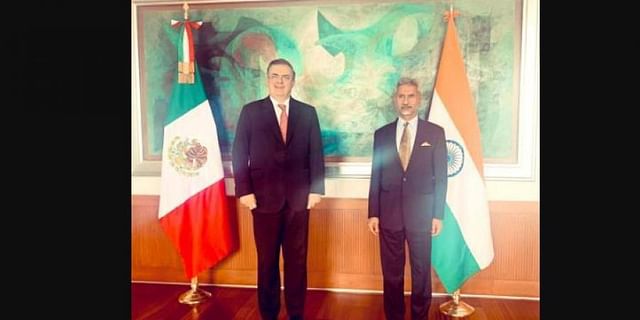 Jaishankar is on a three-day visit to Mexico, his first to the North American country as the External Affairs Minister.

“Concluded a comprehensive discussion with FM @m_ebrard of Mexico. Reviewed our political cooperation, trade and investment, space and scientific potential, cultural exchanges and consular issues. Shared perspectives on governance challenges and global narratives,” Jaishankar tweeted after the meeting on Monday.

Jaishankar, the first External Affairs Minister to visit Mexico in 41 years, said that as independent powers committed to a multipolar world, “India and Mexico must collaborate more closely in international forums.”

“Glad to note our Mexican partners reciprocating this sentiment,” he tweeted.

Jaishankar also paid homage to Mahatma Gandhi in Mexico City by offering floral tributes to the statue of the father of the nation.

“Particularly appropriate on the occasion of the anniversary of Mexican independence,” he tweeted.

As part of his other engagements, Jaishankar also attended the Independence Day celebrations of Mexico in Mexico City.

“Glad to learn that the First Lady is an enthusiastic and ardent practitioner of Yoga,” he tweeted.

“Appreciated their warm words on our #vaccinemaitri,” Jaishankar said.

Shahriar Alam on the sidelines of the independence day celebrations in Mexico City.

Earlier, Jaishankar was received by Minister of Finance and Public Credit Rogelio Ramírez de la O with whom he discussed Mexico’s response to the COVID-19 pandemic.

Jaishankar reached Mexico at the invitation of his Mexican counterpart Casaubón after concluding his visit to the US for the 76th session of the United Nations General Assembly.

Jaishankar will interact with the leading CEOs and the business community in Mexico, which is currently India’s second largest trade partner in Latin America and is a member of the United Nations Security Council (UNSC) alongside India for the 2021-22 period, according to the Ministry of External Affairs (MEA).