Modi’s government is for billionaires, not farmers: Priyanka Gandhi Vadra 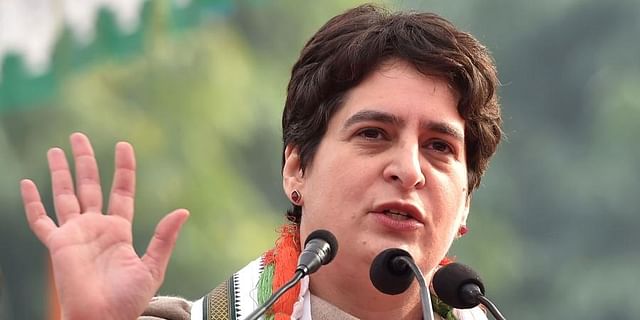 Attacking Prime Minister Narendra Modi in his parliamentary constituency Varanasi and UP CM Yogi Adityanath, Congress general secretary Priyanka Gandhi Vadra on Sunday raised questions on the safety of the common man, referring to the recent violence in Lakhimpur Kheri.

Addressing her first outing as part of the Kisan Nyay rally, seen as the poll bugle, at Jagat Ram Inter College in Rohinia, Priyanka  claimed that nobody including the poor, deprived, downtrodden and women, was safe under the Modi government. She accused the prime minister of favouring his handful of billionaire friends.

Priyanka began her Varanasi visit on a religious note. She first visited the famous Kashi Vishwanath temple and sought the blessings of Lord Shiva, followed by a trip to Durgakund temple on the occasion of Navratri.

Beginning her speech with shlokas, the UP in-charge of Congress claimed she was observing fast on the fourth Navratri day and said that the country was about faith. “Here, farmers feed citizens and their sons protect the country’s borders. But when some of them get killed in incidents like the one in Lakhimpuri Kheri, their families lose hope for justice.”

Priyanka attacked the PM, saying that India was neither his nor his ministry’s property. “This country belongs to you all. If you are not aware, you will not be able to save your country and yourself.” She targeted Modi, saying that despite visiting Lucknow at around the same time, he did not find time to meet the aggrieved families. “The PM keeps on touring countries but he could not visit the bereaved families of Lakhimpur Kheri in their hour of grief.”

Stating that her fight for justice would continue until Union minister Ajay Mishra Teni was suspended, the Congress leader said the junior home minister’s son (Ashish Mishra) had run over protesting farmers. “The chief minister is protecting him…What is this?”

She criticised Modi for not talking to farmers on the contentious farm laws. “The farmers are protesting because they know their land will be snatched by the corporate friends of Modi if the laws are implemented,” Priyanka said.

Exhorting people, especially farmers, to fight for their rights, the Congress general secretary said: “Those who call you andolankari (protesters) and terrorists, force them to give you justice. We are the workers of Congress. We are not scared of anyone. Put us in jail, beat us, but we will keep fighting for justice.”

India, China fail to break the ice over the standoff in Eastern Ladakh