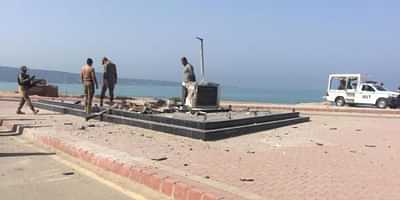 A statue of Pakistan’s founder Mohammad Ali Jinnah has been destroyed by the Baloch militants in a bomb attack in the coastal city of Gwadar in the troubled Balochistan province. The statue, which was installed in June at Marine Drive – considered a safe zone – was blown up by explosives placed beneath the statue on Sunday morning, Dawn reported on Monday.

The statue was completely destroyed in the blast, it added. Babgar Baloch, a spokesman for the banned militant organisation Baloch Republican Army, claimed responsibility for the blast on Twitter, BBC Urdu reported.

The matter was being investigated at the highest level, Gwadar Deputy Commissioner Major (retd) Abdul Kabir Khan was quoted as saying by the BBC Urdu. He said that the militants who destroyed Jinnah’s statue by planting explosives entered the area as tourists.

According to him, no arrest has been made so far but the investigation will be completed in a day or two. “We are looking into the matter from all angles and the culprits will be caught soon,” he said.