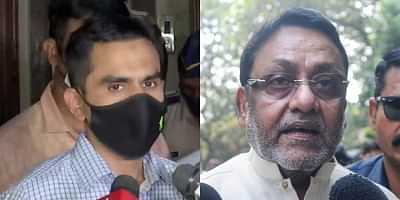 Maharashtra Minister and Nationalist Congress Party (NCP) leader Nawab Malik on Sunday reiterated his allegations against Narcotics Control Bureau’s Zonal Director Sameer Wankhede and said that he firmly stands by his statements and his fight was against fraud and not religion or caste.

He also accused Wankhede of taking away the opportunity of the SC and added that the ‘fight’ is against the ‘fraud’ and not his religion or caste.

“I stand by my statement that he’s (Sameer Wankhede) on post by forging SC certificate. He snatched away a poor SC’s rights. Fight against fraud not religion/caste. I urge Arun Haldar (National Commission for SC, Vice-Chairman) to maintain his post’s dignity,” the minister said while speaking to reporters here.

“When I started (raising allegations against Sameer Wankhede), people I know told me to stop. They said that Shah Rukh Khan is being told that his son is trapped as he (Khan) speaks. My lawyer son was being brainwashed by other lawyers. He used to tell me to stop,” said Malik.

An NCB team busted an alleged drugs party on the Cordelia Cruise ship which was on its way to Goa on October 2. A total of 20 people were arrested in the case. Wankhede was given charge of investigating the case.

Earlier on Thursday, Wankhede had moved Bombay High Court over the enquiry against him by the Maharashtra government in connection with the extortion charges levelled against him in the drugs on cruise case and demanded a probe by CBI or any central agency in the matter. The court had disposed of his petition.

Meanwhile, the Maharashtra Social Justice Minister Dhananjay Munde while reacting to the allegations that Wankhede faked his caste certificate for the job, said on Sunday that if the department receives a formal complaint, it will investigate the matter.

“If someone objects to the validity of the caste certificate of Sameer Wankhede and files a complaint with the social justice department, we will probe the matter,” said Dhananjay Munde, Maharashtra Social Justice Minister.

Malik who has been levelling various allegations on Wankhede since the Mumbai drugs-on-cruise case came to the fore, accused him of using a fake birth certificate to secure a government job.

He had alleged that Sameer Wankhede was born a Muslim but he forged documents, including a caste certificate, to pass off as a Scheduled Caste (SC) person to get recruitment under quota after clearing the UPSC exams.

He had shared the birth certificate of Wankhede on Twitter saying “Sameer Dawood Wankhede’s fraud started from here.” Following this Wankhede said he will fight Malik legally.

Malik had also shared a purported picture of ‘nikah’ of Wankhede with his first wife Dr Shabana Quraishi.

“Photo of sweet couple Sameer Dawood Wankhede and Dr Shabana Qureshi,” Malik had said in a tweet along with a photograph.

In a subsequent tweet, the minister said, “Presenting shortly the ‘Nikah Nama’ of the first marriage of ‘Sameer Dawood Wankhede’.”