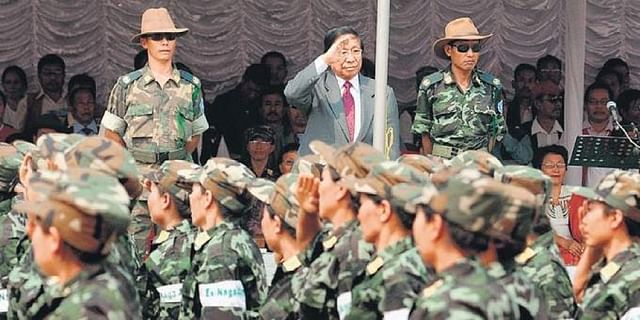 The National Socialist Council of Nagalim (NSCN-IM) viewed the Centre’s offer of Naga flag and “yehzabo” (constitution) post-solution to the vexed ‘Naga political problem’ as a well laid trap on Sunday.

Stating that its pressing concern is on the two core issues, the insurgent group said the talks with the Centre’s new interlocutor AK Mishra, which resumed after a gap of two years, failed to live up to all the hype as the Centre continued to indulge in political escapism.

The NSCN-IM said despite officially recognising the unique history and situation of the Nagas which had led to the signing of the Framework Agreement in 2015, the Centre was still pretentiously acting stubborn as the crucial rounds of talks that focused on the Naga flag and the Naga constitution were driven to hang in balance.

“The Naga flag is not just a piece of cloth to the Nagas but a feeling of pride which helped hundreds of Naga martyrs to sacrifice their lives by just seeing the flag flying high in the sky. Down the line, the Nagas…have learned to attach a strong emotional bond to the Naga flag as a symbol of the Naga nation’s pride and values,” the NSCN-IM said.

Alleging that the Centre is talking in different languages to different Naga rebel groups on the issue of Naga flag, the outfit said it was not impressed when the offer was made to accept the Naga flag as a cultural symbol.

The outfit asserted it would not succumb to the flattering “post solution” offer. The NSCN cannot drag the Nagas to make another blunder by falling into the trap being machinated by the Government of India, it said.

“The Nagas cannot be carried away by the ‘post solution narrative’ which is just a well laid trap. Christmas may come and go but the NSCN will not stop fighting to defend the Naga political identity,” the outfit added.