New York authorities return over 150 Indian antiquities to the country 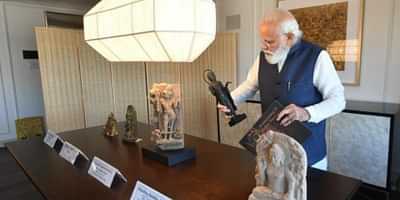 The Indian government has thanked the New York District Attorney office for its “excellent support” in returning over 150 antiquities to the country and appreciated its role to enhance the Indo-US people-to-people links and cultural understanding through restitution of the precious artefacts.

Prime Minister Narendra Modi brought back 157 artefacts and antiquities, which were handed over to India by the US during his visit, with both he and President Joe Biden expressing commitment to strengthening efforts to combat theft, illicit trade and trafficking of cultural objects.

An official statement said on Saturday that while nearly half of the artefacts (71) are cultural, the other half consists of figurines related to Hinduism (60), Buddhism (16) and Jainism (9). Modi conveyed his deep appreciation for the repatriation of antiquities to India by the United States.