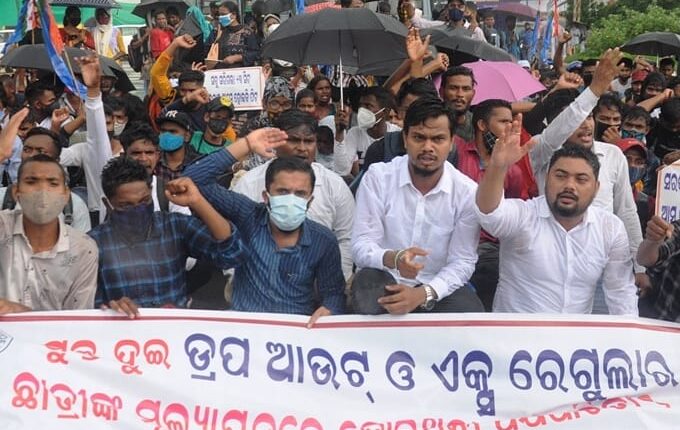 A large protest was held at Master Canteen Square by NSUI against the Department of Mass Education’s. It was attended by more than 1,000 students from different districts of the state. The roadblock continued for three hours, despite heavy rains.

In this regard, Mr. Yasir Nawaz said that on June 4, 2021, the Chief Minister cancelled +2 examination in view of covid 19.  He also announced that the result will be out after a special evaluation.

In 18th June, government introduced a new rule in which there were a lot of partialities for ex regular students. When student questioned exam inspector Bijay Sahu , he told a new rule would be introduced soon but no notification was out until 31 july.  On 31st July, Samir Das issued a notification in which it was clearly mentioned that regular and ex-regular students would attend offline exams. But government did injustice to ex regular students. Because of government’s irregularities, only 26% ex regular students passed in the examination. As regular students, ex regular students also demanded to get marks according to their 10th marks. They are facing many problems like not getting seats in any graduation courses. They have also demanded that government should help them in taking admission to graduation courses.Mr. Nawaz has also warned government to not play with these student’s feelings otherwise the protest will get intense. He also called for Vidhan Sabha gherao on 7th september demanding arrest of Law Minister Pratap Jena on the issue of staff selection commission scam. Sunil Matia, Abhiram Gouda, Kartik Kandi, Sagar Pattnaik, Bibhuti Bhushan Mahapatra, Biswabhushan Mahapatra were present.