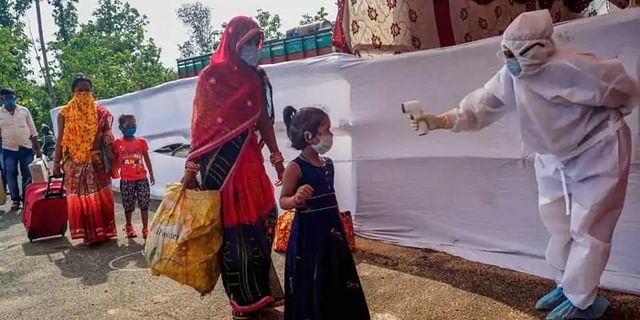 A Day ahead of commencement of Durga Puja, Odisha witnessed a sudden spike in new Covid-19 cases with the infection count going up by 25 per cent in the last 24 hours.

The State reported 652 cases against 526 cases a day before. Seven patients also succumbed to the disease in the last 24 hours taking the case fatality rate to over one per cent. Four people had died the previous day.

The daily caseload that was hovering around 500 for over a fortnight crossed the 600-mark triggering the fear of the third wave which several mathematical models had earlier predicted.

Khurda district, especially Bhubaneswar, has emerged as a headache for the administration as the State Capital with over 90 per cent fully vaccinated people has been recording the highest new cases and deaths in the State.

Of the fresh cases, Khurda reported the maximum 331 cases including 159 from Bhubaneswar followed by Cuttack (70). While six districts reported nil cases, Boudh and Nabarangpur are Covid free as none of the two districts have any active cases.

The infection rose significantly in rural Khurda following the arrival of migrants from different states for Dussehra. The cases went up from 17 on Friday to 172 on Saturday.

Five deaths were reported from Bhubaneswar and one each from Angul and Nabarangpur district.

Health experts attributed the spike in cases to crowded markets without proper social distancing and mask use.

“As public spaces like markets, malls, restaurants and hospitals are crowded, we will be going to see an increase in Covid numbers. It is high time for the local administration to enforce the Covid norms strictly. Else, the third wave is imminent,” they warned.

The health authorities have also alerted people of a possible spike in cases across the State if they do not adhere to the Covid appropriate behaviour during the festive and winter months.Director of Public Health Dr Niranjan Mishra said as per WHO, the coronavirus threat still exists.

“The next outbreak is in our hands. If we follow the prescribed norms, it will eventually become endemic and cases will come down,” he said.

Dr Mishra further informed that the Covid pandemic has taken a toll on the mental health due to loss of family members, job insecurity and isolation. Several mobile health units have been set up in districts, he said and advised people with anxiety and depression to seek medical aid.

Children should learn about ecological significance of jumbos, says study