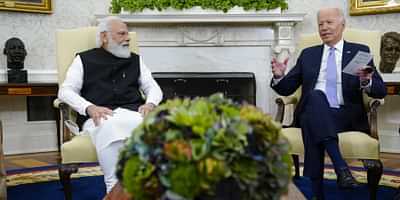 Prime Minister Narendra Modi in his first-ever in-person meeting with President Joe Biden raised a number of issues involving the Indian community in America, including access for Indian professionals in the US and speaking about the H-1B visas, Foreign Secretary Harsh Vardhan Shringla has said.

Prime Minister Modi described as “outstanding” his first bilateral meeting in the Oval Office with US President Joe Biden who said the Indo-US relationship is destined to be “stronger, closer and tighter”.

The prime minister and his counterparts – Scott Morrison of Australia and Japan’s Yoshihide Suga – also attended the meeting of Quad leaders hosted by US President Biden in the US capital on Friday.

“He (Modi) spoke of the issue of getting access for Indian professionals to the United States. In that context he mentioned H-1B visa,” Shringla told reporters at a news conference on Friday.