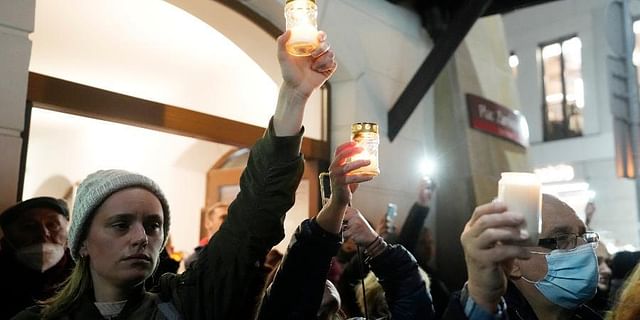 Protesters turned out in Warsaw and in many other Polish cities Saturday to decry the country’s restrictive abortion law, which they say has led to the death of a young mother with pregnancy that had medical problems.

The protesters held portraits of the woman, 30-year-old Iza, who died in hospital in Pszczyna, southern Poland, from septic shock. She died in September but her death just became known in the last week. Doctors at the hospital held off terminating her 22-week pregnancy despite the fact that her fetus lacked enough amniotic fluid to survive, her family and a lawyer say.

The doctors have been suspended and prosecutors are investigating.

Women’s rights activists say the woman was a victim of Poland’s newly restrictive abortion law. They say doctors in Poland, a heavily Catholic nation, now wait for a fetus with severe defects to die in the womb rather than perform an abortion. Unlawful abortion can carry a sentence of up to eight years in prison.

Participating in the protest in Warsaw, under the motto of “Not One More” woman to die, was Donald Tusk, the former European Union leader who is now head of Poland’s opposition. The protesters gathered before the Constitutional Tribunal that ruled last year that terminating a pregnancy with congenital defects is against Poland’s constitution. They then marched to the Health Ministry and lit up their mobile phones in memory of the woman who died.

Protests were also held in Gdansk, Poznan, Wroclaw, Bialystok and in many other cities.

Before the new restriction, women in Poland could have abortions only in three cases: if the pregnancy resulted from a crime like rape, if the woman’s life was at risk, or in the case of irreparable defects of the fetus. The last possibility was closed by the tribunal’s verdict.

Those in favor of the new restriction say it’s not clear that the restriction led to the woman’s death.

Health Minister Adam Niedzielski said the case was “difficult” and needed close analysis. He said instructions will be issued to make it clear to obstetricians that a “woman’s safety is a reason to terminate a pregnancy.”