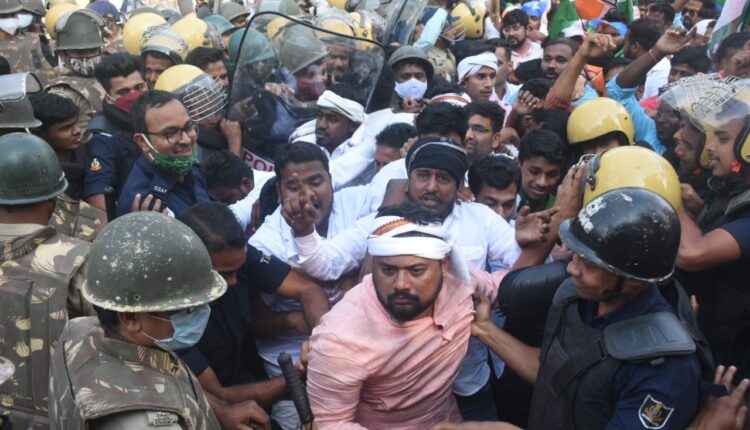 NewsAlert24x7 | Odisha : Congress’ student wing NSUI launched Vidhan Sabha Gherao Programe at the Lower PMG in Bhubaneswar. Thousands of students gathered to attend the protest rally. NSUI & Youth Congress of Odisha Congress have been protesting against the Government on number of occasions. Recently they demanded sacking of the Minister in the scandalous incident of Mamita Meher Murder Case in which the BJD govt is in the dock to shield MoS Home Dibya Shanker Mishra. Minister has been accused of having involvement in the murder case where one of close aides

“Today’s brutality has crossed all limits, it shows BJD government is intolerant and sheilding a tainted minister” says an eye witness who saw the brutality by police on students.

Abhishek Mahananda , the head of Social Media in Odisha Congress posted a photo of injured student and tweeted tagging CM Naveen Patnaik. He asked , See this Mr CM Naveen Patnaik, if could sleep peacefully tonight. Attacking students and make them bleed for what ? For asking you to take action against a tainted minister,it’s now proved that #BJDGundaPolice is on rampage all over Odisha.

Netizens were seen using a hashtag #BJDGundaPolice on social media platforms especially on twitter. Many uploaded the photos and videos of police brutality on the students and demanded an apology from the CM for using force on protestors to suppress the voice.