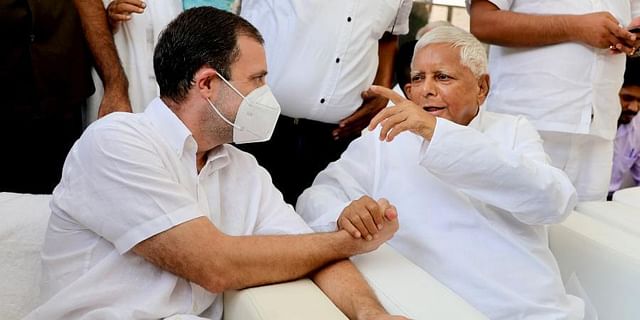 Former Congress president Rahul Gandhi visited LJP (Ram Vilas) leader Chirag Paswan on his father’s first death anniversary amid overtures by opposition parties to the Dalit leader to switch over to their camp.

Chirag Paswan said his father enjoyed excellent personal relations with politicians cutting across party lines, which was underlined by the presence of members of the ruling BJP-led NDA as well as opposition parties.

Many other leaders including Congress president Sonia Gandhi and NCP chief Sharad Pawar sent their condolence message as well, he noted.

He reiterated his party’s demand for Bharat Ratna, India’s highest civilian honour, for his father, who was part of several governments headed by rival alliances at different points of time.

Gandhi visited Paswan’s Janpath residence, home to his father Ram Vilas Paswan for over three decades, and spent time with him and his family members as people paid homage to one of the tallest Dalit leaders who passed away last year.

In a tweet Gandhi said, “Heartfelt tributes to Ram Vilas Paswan on his first death anniversary. Also met Lalu Prasad Yadav on the occasion. Was happy to see him in good health.”

Gandhi’s visit to the LJP leader comes amid a growing distance between him and the BJP after the ruling party dumped him for another LJP faction, now given the name Rashtriya Lok Janshakti Party, headed by his uncle Pashupati Kumar Paras, a Union minister.

Opposition leaders in Bihar, including RJD president Yadav and his son Tejashwi Yadav, have been urging Chirag Paswan to switch over to their camp.

Sources, however, added that not much should be read into Gandhi’s visit to Paswan’s residence as he had invited leaders of various parties.

At a commemoration event he had held in Patna last month, leaders from various parties, including the BJP and the RJD, were in attendance.

Chirag Paswan has, however, kept his cards close to chest, stressing that his immediate priority is to build his party.

Will ramp up production capacity as new Indian vaccines come on stream: India at UN

US, Taliban to hold first talks since Afghanistan withdrawal