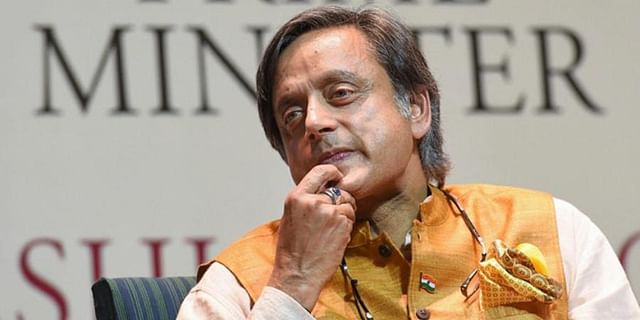 Sardar Vallabhbhai Patel represents a national appeal and a Gujarati origin that suit Narendra Modi and the “Modi-as-latter-day-Patel” message has been resonating well with many Gujaratis, argues Congress leader Shashi Tharoor.

The Thiruvananthapuram MP also feels that Modi made a shrewd domestic political calculation – that wrapping himself in the mantle of distinguished Gujaratis Mahatma Gandhi and Patel would enable some of their lustre to rub off on him.

Tharoor makes these observations in his new book “Pride, Prejudice and Punditry: The Essential Shashi Tharoor”, which brings together various fiction, non-fiction and poetry from his published works as well as many pieces written specially for this volume.

“Narendra Modi made a shrewd domestic political calculation – that wrapping himself in the mantle of other distinguished Gujaratis, notably Mahatma Gandhi and Sardar Vallabhbhai Patel, would enable some of their lustre to rub off on him,” he writes in this book.

“The process had already begun, lest we forget, when then chief minister Modi moved aggressively to lay claim to the legacy of one of India’s most respected founding fathers, Sardar Vallabhbhai Patel, before the 2014 election,” he says.

Tharoor claims that in his “quest to garb himself in a more distinguished lineage than his party can ordinarily lay claim to, Modi called on farmers across India to donate iron from their ploughs to construct a giant, nearly 600-foot statue, of the Iron Man in his state, which would be by far the tallest statue in the world, dwarfing the Statue of Liberty”.

But it will be “less of a monument to the modest Gandhian it ostensibly honours than an embodiment of the overweening ambitions of its builder – who decided to get a Chinese foundry to cast it, for his ambitions exceeded India’s capacities”, he adds.

The imposing 182-m Statue of Unity of Patel, built on an islet Sadhu Bet near Sardar Sarovar Dam in Gujarat’s Narmada district, is twice the height of the Statue of Liberty in the US.

According to Tharoor, Modi’s motives are easy to divine.

“As his own image was tarnished by the communal massacre in Gujarat when he was chief minister in 2002, identifying himself with Patel is an attempt at character building by association – portraying Modi himself as an embodiment of the tough, decisive man of action that Patel was, rather than the destructive bigot his enemies decry,” he writes.

Tharoor says it helps that Patel is widely admired for his extraordinary role in forging India that gave him an unchallenged standing as the Iron Man.

“Patel represents both a national appeal and a Gujarati origin that suits Modi. The Modi-as-latter-day-Patel message has been resonating well with many Gujaratis, who are proud to be reminded of a native son the nation looks up to, and with many of India’s urban middle class, who see in Modi a strong leader to cut through the confusion and indecision of India’s messy democracy,” he argues.

Tharoor thinks there is a particular irony to a self-proclaimed ‘Hindu nationalist’ like Modi laying claim to the legacy of a Gandhian leader who would never have qualified his Indian nationalism with a religious label.

“Sardar Patel believed in equal rights for all irrespective of their religion or caste,” he says.

In one of the essays on Jawaharlal Nehru’s legacy, Tharoor cites Atal Bihari Vajpayee’s emotional and poetic tribute in Parliament to India’s first prime minister after his death.”

Vajpayee’s statements went far beyond the claims of ritual.

He called on the nation to rededicate itself to Nehru’s ideals.

“‘With unity, discipline and self-confidence,’ Vajpayee said, in words that could never have been Modi’s, ‘we must make this Republic of ours flourish. The leader has gone, but the followers remain. The sun has set, yet by the shadow of stars we must find our way. These are testing times, but we must dedicate ourselves to his great aim, so that India can become strong, capable and prosperous…,'” Tharoor writes.

In the book, published by Aleph, Tharoor looks at some of the most important figures of modern Indian history, covers international relations and diplomacy, examines various aspects of the faith and comes up with a light-hearted take on sundry matters besides an evocative look at his Kerala heritage among other topics.