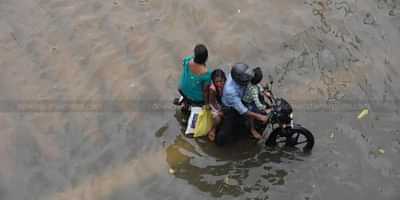 Under the influence of a cyclonic circulation in the Bay of Bengal, Puducherry experienced flooding of roads, inundation of low-lying areas and damages to crops as rains lashed the Union territory in the last two days throwing life out of gear. In the last nine hours on Monday from 8.30 am to 5.30 pm, Puducherry registered 7.82 cm of rainfall, while till 8.30 am on Monday from 8.30 am on Sunday, it experienced 8.21 cm of rainfall.

Rainbow Nagar, Krishna Nagar, India Gandhi Statue, Sivaji Statue and Uzhavar Sandhai in the old bus stand area witnessed heavy flooding. At 9th cross in Rainbow Nagar, boats were pressed into service by social activists to move out people. A colony of Scheduled Caste residents in Villianur commune has been flooded, with water having entered the houses of some 17 families residing there.