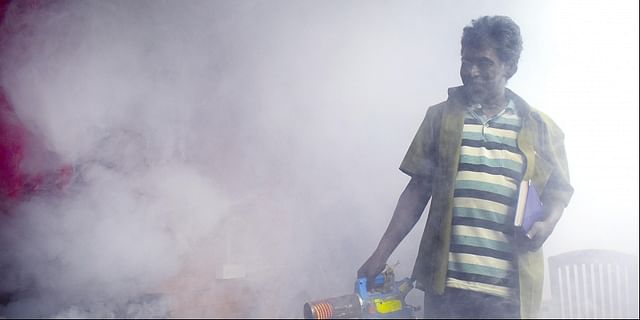 Dengue cases continue to rise steadily in Rourkela despite the efforts of health authorities to stem the spread of the vector-borne disease. Till Monday, the Sundargarh district had reported 1,435 dengue cases with Rourkela alone accounting for 1,365 cases, which is around 95 per cent of the total caseload. Not more than three months back, the Steel City had less than 100 dengue cases.

Sources in the Health department said in mid-July, dengue cases were first reported from certain areas under the territorial jurisdictions of the Rourkela Steel Plant (RSP) and South Eastern Railway (SER). Besides, some fringe areas of Rourkela Municipal Corporation also reported dengue cases.

The SER effectively fought the menace containing the total cases to 131, but the RSP authorities after much delay, started destroying mosquito breeding grounds, larvicide spraying, fogging and bush cutting from September 22, that too erratically overlooking the action plan of the Health department. So far, 766 dengue cases have been reported from areas under RSP limits.

Former Congress MLA Pravat Mohapatra accused the RMC of negligence as areas under the jurisdiction of the civic body have reported 365 cases. Certain fringe pockets of Malgodam, Gopabandhupali and MS Pali on SER land have reported 102 cases as these areas have been overlooked by RMC, he claimed.

Mohapatra further said more than 450 government quarters in RMC limits have become breeding grounds for mosquitoes due to unattended wild growth, non-application of larvicide on decades old septic tanks and in absence of fogging.

Sources said the health wing of RMC is doing precious little to contain the menace. As many as 30 field workers have been engaged for only three hours from 8 am to 11 am on a daily wage of Rs 311. Besides, six multi-purpose health supervisors are reportedly speeding their time in RMC office instead of going to the field for inspection.

For applying larvicide, the RMC has only six sprayers against the requirement of at least 80 sprayers. In the prevailing situation, hand-held fogging machines are required to kill adult mosquitoes but the RMC has only six of them. Vehicle-mounted fogging machines are being engaged but to little effect. RMC authorities claimed that 480 km of drains have been cleaned and larvicide is being applies regularly.