Three members of a family killed for practising witchcraft in Jharkhand 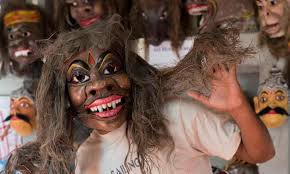 Three members of a family were axed to death allegedly for practising witchcraft in Jharkhand’s Gumla district, a senior police officer on Sunday said.

The victims were identified as Bandhan Oraon (55), his wife Somari Oraon (50) and daughter-in-law Basmani Oraon (38) of Luto Panso village.

The victims were having their dinner on Saturday night when two nephews of the victim allegedly barged into their home and attacked the couple fatally, police said, adding Basmani, who rushed to rescue on hearing the screams, was also attacked.

Sub-Divisional Police Officer (SDPO), Manish Chandra Lal along with a huge police force rushed to the spot and recovered the bodies.

The bodies have been sent for post-mortem.

The SDPO confirmed the incident and assured that the culprits, who were absconding, will be arrested soon.

The accused suspected that the black magic being practised by the couple was the reason for keeping their family members unwell.

Basmani’s husband work outside the state and her two minor children, who were present at home, were unharmed by the attackers, police added.

MI is hopeful for Hardik Pandya’s return against RCB on Sunday: Zahir Khan