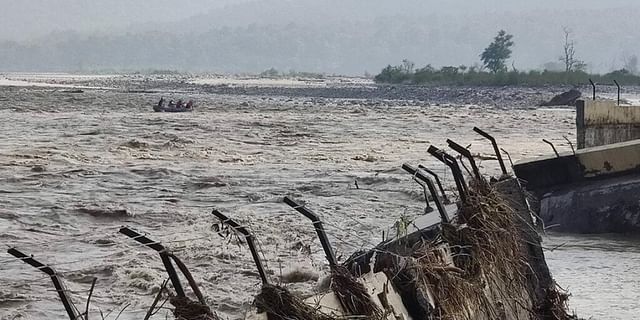 Even as search for the missing trekkers continues in rain-battered Uttarakhand, complaints of mismanagement, lack of coordination and irregularities in relief work have started emerging from disaster stricken areas while people are still struggling to pick up pieces of life.

Rekha Negi, gram pradhan of Umagarh village in Ramgarh area of Nainital district, said, “There has been no help from the administration yet. No one from the government has contacted us. The village mostly has elderly who are facing multiple health related issues which makes it even more difficult for us.”

Nainital district with 25 deaths remains the worst affected.  Visuals of elderly being carried on palkis have emerged from the hilly areas of Ramgarh. Many alleged that the district administration failed to arrange food for the teams of National Disaster Response Force and State Disaster Response Force. It’s the local residents who are taking care of the relief teams’ food.

“We have been arranging food for the members of NDRF and SDRF since October 20 when they were air-dropped here for rescue and search operations. More is needed to be done,” Krishna Nand Shastri from Sukna village of Nainital said.

Officials from the district administration said the residents were requested to provide good for the rescue teams and they would be paid for it. On Sunday, director general of police Ashok Kumar visited Nainital and took a review meeting with district police officers and the inspector general of police of Kumaon division. He praised the “outstanding” performance of police and SDRF teams.

“Around 48,000 people were evacuated to safe  places and 9,900 were rescued across the state. Those who have performed well will be awarded medals on upcoming January 26,” he said.

The cumulative death toll in rain-related incidents in Uttarakhand rose to 77.

However, search is still on for another trekker in the area, State Disaster Response Force (SDRF) sources here said.

Meanwhile, 19 people stranded in Kafni glacier were brought to their village Chuni and 33 stuck in Pindari glacier were evacuated to safety, they said.

Two trekkers missing on way to Chitkul via Harsil in Uttarkashi district are yet to be found, they said.

Bodies of seven trekkers — part of the 11-member team — were recovered on Sunday while two other members of the group rescued alive have been under treatment for a couple of days.

Bodies of trekkers from West Bengal were sent home after a postmortem examination while the last rites of a woman trekker from Delhi was performed by her family members in Uttarkashi, district disaster management officer Devendra Patwal said.

Accompanied by Cabinet ministers Yatishwaranand and Dhan Singh Rawat, Dhami said the state government stood with the affected people who will be given all help.