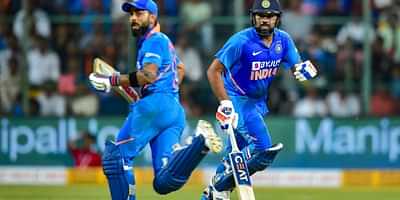 At 5:53 PM on Thursday, Virat Kohi broke the news. Once India’s upcoming T20 World Cup campaign ends in the UAE in November, he will step down as skipper of the national team in the format. It had been coming.

He cited the immense workload he has endured since taking over as all-format captain in 2017. However, the 32-year-old wrote that he would be available as a batsman going forward. Like how his predecessor, MS Dhoni, passed the baton to him, Kohli has done it now.

If anyone occupies the hot seat other than Rohit Sharma, the decorated T20 captain who has a record five IPL titles to his name, it would come as a massive surprise. Never mind the fact that Rohit is 34, but with another T20 World Cup slated for October 2022, it is hard to see selectors handing over the reigns to an untested candidate.

If Kohli, who has led the side to 27 wins in 45 matches, was waiting in the wings in 2017, Rohit is in that position now. With every IPL title he has held aloft for Mumbai Indians, he has been sending gentle reminders.

If children contract COVID, but are asymptomatic, it shouldn’t be matter of concern: Experts